In 2017, Dr. Marisa Kälin from University Hospital, Zurich, worked as a volunteer doctor at the tuberculosis (TB) ward of Mulago National Referral Hospital in Kampala, Uganda. This ward houses patients who present with multi-drug resistant (MDR) TB, and they are treated by a highly motivated team of doctors, nurses and counsellors. 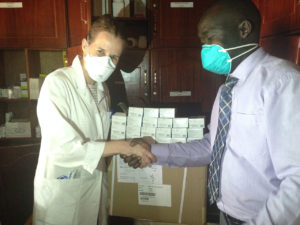 Marisa Kälin delivers the donated levofloxacin to the ward

From February to April 2017, the drug Levofloxacin, a so called “core drug” within a complex drug cocktail necessary to treat MDR TB, was unavailable to the patients in the ward (stock-out). As a result, newly diagnosed patients with MDR TB were no longer able to receive adequate treatment. During this time, two patients died of MDR TB as treatment could not be started. Dr. Kälin and her colleagues in the ward approached the association Researchers for Global Health (R4GH) with a request to donate Levofloxacin. The request was granted, and thanks to a donation of $1500 USD, a total of 33 patients were able to receive life-saving treatment for MDR TB. The money donated for this cause was given to R4GH by patients in Zurich.

We would like to sincerely thank Dr. Marisa Kälin, the TB ward team, specifically Dr. Susan Adakun (head of the TB ward), and the many patients from Zurich for their efforts. 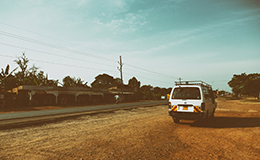